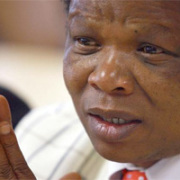 Jon Qwelane is going to challenge the Equality Act. Well, if anyone was going to, it would probably be Jon, our honourable ambassador to Uganda. Qwelane will use the Constitution to challenge a 2011 ruling that he was guilty of hate speech when he wrote a 2008 column titled “Call me names, but gay is NOT okay”. It’s interesting timing, because just last weekend justice minister Jeff Radebe indicated that the government is preparing to beef up its response to hate crimes, including hate speech. By REBECCA DAVIS.

Justice minister Jeff Radebe tackled the issue of both hate crimes and hate speech in a talk to the SA Jewish Board of Deputies last Sunday, at an event titled “Imagine a World Without Hate!” It was a slightly oddly phrased address, if only because it included lines which sound as if they had been taken from a 19th century ethnographic textbook, like “Jews are found across the political spectrum and to pretend that they were only a merchant and currently a capitalist class is not supported by scientific evidence”.

Leaving that aside, Radebe’s message was that the government is toughening up on hate crimes. Until now, hate crimes – that is, crimes motivated by hatred towards specific groups – have not been recognized as a special category in South African law. When Daily Maverick explored this issue last June, we were told by Unisa psychology professor Juan Nel, who has been spearheading the campaign for the recognition of hate crimes, that this was likely for two reasons. South Africa did not have dedicated hate crime legislation partly because the advent of such laws is relatively recent internationally, Nel suggested, and partly because there was a tendency in South Africa to view individual crimes as divorced from wider forms of victimization.

Radebe himself has in the past displayed a certain ambivalence towards the idea of classing hate crimes as a discrete crime category. In 2011 he reportedly declared himself opposed to the idea of categorizing the “corrective rape” of lesbians as a hate crime, for instance, because “rape is rape regardless of the motive of the offender”. There are academics internationally who have warned that the introduction of hate crime legislation may have unintended consequences, such as the creation of a “prejudice hierarchy” by selecting certain characteristics, like sexual orientation, for special protection, and not others, like homelessness, for instance.

Nel and others argue, however, that one important reason for classifying hate crimes as distinct from others is to monitor their prevalence in order to develop future policy and strategies for dealing with hate crimes. Up until now, hate crimes haven’t been measured. Over the past few years, however, Nel and the Hate Crime Working Group have been carrying out research into hate crimes in five different provinces. Provisional findings presented in May this year revealed that of the hate crime victims polled the majority were female, black, heterosexual and township-dwelling. They were also more likely to be unemployed.

The most common type of incident perpetrated against them was physical violence (63%), followed by verbal abuse (59%) and rape (44%). The most listed common causes for the reported incidents – other than “Other” – were nationality and sexual orientation. One particularly frightening aspect of the incidents was that although 61% of them involved witnesses, only 16% of the victims were assisted by witnesses. Another chilling statistic is that 47% of the offenders were believed to be law enforcement officials.

In 2010, justice spokesperson Tlali Tlali said that a Hate Crimes Bill was on the cards that would “create offences relating to racial discrimination, xenophobia, hate speech and other related acts of intolerance”. Since then, movement on the issue has been slow. But in his speech on Sunday, Radebe gave a firm indication that progress is being made. The Department of Justice and Constitutional Development, he said, has just finalized a draft policy framework on “Combating Hate Crimes, Hate Speech and Unfair Discrimination”.

The policy framework, Radebe confirmed, is aimed at introducing the legal category of hate crimes, “where there is evidence of a discriminatory motive on the basis of characteristics such as hate, nationality, religion, sexual orientation and the like”. The framework will now be passed to Cabinet for approval and then put out for public participation.

But Radebe said that the policy framework is also aimed at simultaneously re-defining and criminalizing hate speech. It aims, he said, to “refine the concept of hate speech in a way that reflects South Africa’s commitment to high standards of free expression at the same time as combating hate speech”, to “make hate speech a crime” and to develop measures to combat hate speech as well.

So maybe Jon Qwelane’s Constitutional challenge to the Equality Act comes at a useful time. Qwelane’s 2008 Sunday Sun column was ruled to be hate speech in the Equality Court in 2011, shortly after his appointment as ambassador to gay-hating Uganda.  (The column in question is available here.) Headlined “Call me names, but gay is NOT okay”, the piece expressed Qwelane’s dissatisfaction with the trouble in the Anglican Church occasioned by the debate on whether to ordain gay bishops.

Qwelane uses the column to hit out at “the rapid degradation of values and traditions by so-called liberals”, and the tendency of gay men to “shamelessly [flaunt] what are misleadingly termed their ‘lifestyle’ and ‘sexual preferences’.” Qwelane goes on to say that he supports the anti-gay stance of President Robert Mugabe, and notes that he does not fear name-calling from “homosexuals and their backers” because “wrong is wrong”. He concludes with a call for the Constitution to be rewritten to outlaw gay marriage, invoking the slippery-slope argument that otherwise humans will soon be able to marry animals.

Following almost 1,000 complaints to the Press Ombudsman, the South African Human Rights Commission (SAHRC) took the matter to the Equality Court, and the Equality Court agreed that the column constituted hate speech. Qwelane was ordered to make an unconditional apology to the LGBTI community and to donate R100,000 to the SAHRC. Even at the time of the ruling, however, Press Ombudsman Joe Thloloe expressed doubts as to whether Qwelane had really met the conditions for hate speech. Thloloe said that it was in his opinion “most unlikely” that the column would lead to violence against gays and lesbians.

Now Qwelane is launching a challenge to the Equality Act in the South Gauteng High Court in September. Aside from the technical legal aspects of the challenge, Qwelane’s lawyer Andrew Boerner, of the firm Jurgens Bekker Attorneys, told Daily Maverick that one aspect of their argument would be that the features of the column which drew the most criticism – the headline, and an accompanying cartoon showing a man marrying a goat – were not Qwelane’s doing.

Section 10 of the Equality Act holds that “no person may publish, propagate, advocate or communicate words based on one or more of the prohibited grounds, against any person, that could reasonably be construed to demonstrate a clear intention to be hurtful; be harmful or to incite harm; or to promote or propagate hatred”. It has previously been suggested that this is too broad. Daily Maverick’s Stephen Grootes argued as much in 2011 when Julius Malema was facing trial for singing “Dubula Ibhunu”. Similarly, Boerner will argue, “the Equality Act was too far-reaching in its limitation of freedom of expression”.

Boerner also intends to argue that the Equality Act’s definition of hate speech has to match the one in the Bill of Rights, where South Africans’ freedom of expression is protected, but not when it amounts to “propaganda for war, incitement of imminent violence, or advocacy of hatred that is based on race, ethnicity, gender or religion and that constitutes incitement to cause harm”. Much will come down to that last bit: whether Qwelane’s words can be said to have really constituted “incitement to cause harm”.

Discussing the matter on 702 on Thursday, Constitutional law Professor Pierre de Vos said that he suspected Qwelane’s challenge might succeed. De Vos said a lot would rely on whether the “incitement to cause harm” would have to be an exhortation to others to commit physical violence, or whether it could also be construed as an incitement to emotional or other harm.

“The Constitutional Court will now have to give some clarity on what is meant when the Constitution talks about incitement to cause harm,” de Vos said. Those at the Department of Justice responsible for drawing up the policy framework for the new hate crimes and hate speech legislation will no doubt be listening carefully.

Until the court rules, Qwelane’s lawyer seems set on presenting him as a free speech martyr in a way that some may find grating. “If it were not for a select few expressing their unpopular views then we may still believe the world to be flat,” Boerner told Daily Maverick by way of comparison. Not quite the same sort of case, though, is it? DM

International: People’s Pride against a brutal backlash
Scroll to top