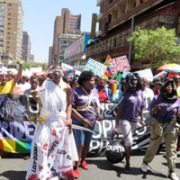 He claims homosexuality is “anti-God, anti-human, and anti-civilisation.” In March at the opening of Parliament he said, “Homosexuals are not welcome in the Gambia. If we catch you, you will regret why you are born.” In 2008, he ordered gays and lesbians to leave the country or have their heads cut off.

In his inauguration speech in August, Zimbabwe’s President Robert Mugabe told the country that homosexuality “destroys nations” and is “a filthy disease.” During the recent elections in Swaziland, some chiefs advised the electorate not to vote for women in mourning; women wearing pants and ‘gays.’

Under the leadership of Vladimir Putin and the Orthodox Church, Russia recently passed the “anti-homosexual propaganda law”, formally known as the “anti-non-traditional-sexual-relations law.” This criminalises demonstrations or LGBTI activism, and fuels hate crimes against LGBTI people in the country. Ironically his role in averting a US military strike against Syria makes Putin worthy of a Nobel Peace Prize nomination!

Putin has openly blamed homosexuality for Russia’s declining birth-rate. This is almost as ridiculous as a statement made by Errol Naidoo, a South African Christian pastor, implying feminism and a “homosexual agenda” led to the Marikana Massacre last year.

Because birds of a feather hate together, Jon Qwelane will feel most at home as South Africa’s ambassador to Uganda. In 2008 after a number of lesbians were murdered, he published an article called, “Call me names, but gay is NOT okay.” The Equality Court found Qwelane guilty of hate speech, but he recently challenged South Africa’s Equality Act, saying it hinders free speech. He also refused to apologise and called for LGBTIAQ rights to be revoked from the Constitution.

These ‘leaders’ have blood on their hands. They are complicit in the rape and brutal murder of Duduzile Zozo, Eudy Simelane and countless more women who have suffered cruel injustices as a result of their sexual orientation. They  shoulder the blame for the torture and killing of Cameroonian journalist and human rights activist Eric Ohena Lemembe, Ugandan gay rights activist David Kato, and so many more people.

They share guilt with the mob of men that threatened and attacked the dance members of VINTAGE at Bree Taxi Rank in Johannesburg, after performing at Soweto Pride last weekend.

Our prejudiced leaders share responsibility for the murders of all the LGBTIAQ people whose names were printed on the innumerable white placards held by demonstrators on the road to Constitutional Hill, during Johannesburg Peoples’ Pride this past Saturday.

At the launch of the UN’s first global campaign to promote gay rights in July, Desmond Tutu condemned hate crimes perpetrated against the LGBTIAQ noting: “I would not worship a god who is homophobic.” During the same month, even Pope Francis spoke out against homophobia and discrimination.

We will never achieve gender equality until LGBTIAQ people are included in this aspiration. Nor will this be a meaningful inclusion unless it moves beyond one defined by victimhood. Until people are no longer reduced to a sex, a gender, a race, religion or a class, but accepted as a complex whole that is first and foremost human, equality and justice cannot be achieved. This is the lesson that the men who lead the world from Putin in Russia to Jammeh in Gambia need to learn.

Katherine Robinson is the Editor and Communications Manager at Gender Links. This article is part of the Gender Links Opinion and Commentary Service, bringing you fresh views on everyday news.

Nigeria: What Gain Has Homosexuality Brought to Nations That Have Legalized...
Scroll to top