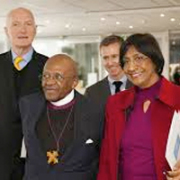 On Friday 26th July, in Cape Town, the United Nations launched a new international campaign to counter homophobia, dubbed the Free and Equal Campaign. I was privileged to share the platform with UN High Commissioner for Human Rights, Judge Navi Pillay, and Archbishop Emeritus Desmond Tutu.

It was a happy event, with strong presentations and powerful media engagement. Best of all, Archbishop Tutu was at his inimitable best: passionate, funny, principled and unflinching in his denunciation of homophobia. The room was full to capacity with print, photo and television journalists. Unusually, they abided by the request to limit questions to homophobia. So both High Commissioner Pillay and Archbishop Tutu were spared questions about the Zimbabwe elections and other pressing international issues. The focus was on the persecution, imprisonment, criminal prosecution, assault, torture and killing of lesbians, gays, bisexual, transgender and intersex people.

Consensual adult same-sex activity is still criminal in seventy-six jurisdictions. Forty of those are in the Commonwealth.  In these countries, but also elsewhere, levels of hatred, ignorance and persecution are still terrifyingly high.

Our dreams were exultantly realised when, in 1994, the words ‘sexual orientation’ were expressly included in the new Constitution’s equality clause – a world first. There followed a finely crafted campaign of public education and strategic litigation. This reached a peak in 2005. By then, the Constitutional Court had already declared criminalization of consensual adult same-sex activity unconstitutional, and had given a raft of other pro-equality decisions. Now, in its crowning judgment, it ruled unanimously that Parliament had to craft marriage equality for gays and lesbians. Despite the powerful dissent of Justice O’Regan, who would have given an immediate remedy, the majority shied away from this.  It granted Parliament one year. The legislature heeded the call. South Africa became the first country, both on the African continent and in the global south, to afford gays and lesbians a fully equal right to marry.

But this impressive constitutional and statutory framework stands in stark contrast to continuing discrimination and violence perpetrated against gays and lesbians.  Lesbians and gay men in townships face the horror of homophobic rape.  Many are still raped and murdered in anti-lesbian hate crimes. On 2 July 2013, Duduzile Zozo, a young lesbian in Thokoza township, south-east of Johannesburg, was brutally murdered and sexually violated.

Constitutional equality and legal protection are clearly not enough.  But they are an indispensible beginning. And part of the rest of the work is vigorous public education and awareness.

This is why the Free and Equal Campaign is such a vital breakthrough. Invoking savvy use of the internet and social media, the campaign targets governments, institutions and the general public. It aims to dispel injurious prejudices about LGBTI people. It expounds the important message that LGBTI people are entitled to human rights, that criminalization of their love is wrong, and that, like other citizens, they are entitled to state protection against violence and persecution.

My own role at the launch was not only as a lawyer and a judge in my country’s highest court, the Constitutional Court. It was also as a proudly gay man. As I started my law practice in 1983, I came out. And I embraced the fight for gay and lesbian equality as part of my human rights work under apartheid. I participated in the negotiations that culminated in the inclusion of LGBTI protection in the Constitution. And, at the end of the year in which South Africa became a non-racial, constitutional democracy, President Mandela appointed me, openly gay, a judge in the High Court.

Nineteen years later, I feel a sense of sombre sobriety about what we have achieved. South Africa aims to be an island of non-discrimination on a continental sea of hatred, ignorance and persecution. But we have very far to go. The ideal world is one in which young people growing into a sense of themselves will feel no stigma and no fear about a possible LGBTI identity.  That is still very far away.

Our two greatest foes in attaining that ideal are invisibility and silence. Most LGBTI people, everywhere in the world, still cannot, or still choose not to, claim their identity. They are invisible. Unlike gender and racial differences, which generally are visible, difference in sexual orientation mostly is not. This leads to spurious claims that homosexual identity is Western, or North American, or European. It is not. LGBTI people constitute between 5 and 10% of all people, in all countries, societies, cultures and religions, everywhere. Free and Equal offers us all a chance to end invisibility.

Across my continent, LGBTI persons are becoming defiantly visible, and defiantly vocal. In Uganda, Cameroon, The Gambia and elsewhere, this is leading to a terrible backlash. But our progress to equality is irreversible. Every family, every community, every workplace, every organisation has an LBGTI person in it.  Once we realise that LGBTI people are integral to our family and working and community lives, persecution and ignorance will abate.

The Free and Equal Campaign is a welcome and hopeful new step towards that ideal.

Justice Edwin Cameron currently sits as a Justice of the Constitutional Court of South Africa.  His memoir, Witness to AIDS was published in 2005.  He has been described by former South African President, Nelson Mandela, as ‘one of South Africa’s new heroes’.

The Love Not Hate Programme
Scroll to top