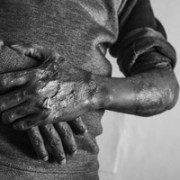 In May 2008, 62 people were killed in a wave of xenophobic attacks across townships.

Foreign nationals, mostly migrants from Somalia and Ethiopia,  were dragged through the streets of Alexandra, barely a few kilometers from Johannesburg’s plush Sandton suburb, and “necklaced” –  a throwback to the summary execution tactic used in the Apartheid days.

A rubber tyre, filled with petrol, is forced around a victim’s chest and arms, and set alight.

In an instant, the story of South Africa’s much-touted rainbow nation of black, white and brown people happily living together, fizzled away in an outburst of vengeance.

Tens of thousands of people were displaced, forced to seek refuge in churches, mosques and even police stations. In the end, it took military intervention to quell the violence.

South Africa is a nation of multiple ethnicities, languages and nationalities. From the Zulu and Xhosa, to the Dutch and the British. Somali and Tutsi to Indian Tamil and Gujarati, Chinese and Zimbabwean.

However divided, unequal, and structurally flawed, South Africa is home to a very diverse population of people. A country with deep pockets, it remains attractive as a home for migrants, some of them seeking greener economic pastures, others safety and security.

The economy relies heavily on migrants, be it to make up for a massive skills shortage or as cheap labour in farms and mines.

Despite the violence meted out to foreign nationals, tens of thousands continue to seek asylum there, as many as 60,000 to 80,000 per year.

Xenophobia in South Africa is not new. Some, like Michael Neocosmos, Director of Global Movements Research at the University of South Africa (UNISA), recall anti-migrant sentiment in the early nineties, when the new government was in the midst of planning new economic policies and politicians of all stripes began drumming up anti-immigrant sentiment.

“It is important to recognise that xenophobia can exist without violence. And it’s not sufficient to simply recognise it when people start killing each other,” he said.

In a most painful of ironies, many South Africans associate foreign black Africans with disease, genocide and dictatorships.

The ills of Apartheid: skin colour, complexion and passes, in this case citizenship, are still the determinants of a better life, or discrimination.

Little illuminates this disparity more than the infamous Lindela Repatriation Centre, built in 1996 for undocumented foreign nationals entering the country. Lindela, outside Johannesburg, has been a scene of abuse, corruption and incessant overcrowding. But the undocumented are also held at police stations, even army bases.

“There is evidence that even in 1994, the records have shown that foreigners were thrown out moving trains because they are killed of bringing diseases, taking jobs, the same rhetoric we hear today,” Jean Pierre Misago, a researcher at the African Centre for Migration and Society at the University of Witwatersrand, said.

And build up it did. In 1998, three foreign-nationals were killed on a train, between Johannesburg and Pretoria. In 2000, a Sudanese refugee was thrown from a train on a similar route. The reasons were all the same: blaming foreigners for a lack of jobs, or economic opportunity. In 2007, a shop in the eastern Cape was set alight by a mob.

The violence that escalated in 2008, was distinctive and decisive. It affected black, African foreign nationals; poor and disenfranchised South Africans; in the townships, but there is no evidence to suggest white Europeans were attacked,  or those from the Indian subcontinent.

A very particular demographic paid the price, but researchers remind us that at least one third of the victims were actually South African. Xenophobia is not a problem unique to South Africa.

With so many economies battling recession for the better part of the past decade, the deadly triad of competition-survival-blame has seen fear of the foreigner rise across the globe.

“Xenophobia is experienced in the north and the south, in the Southern African Development Community (SADC) regions and other countries. It’s a worldwide phenomenon,” Misago said.

But, contrary to popular belief, xenophobia in South Africa is not just a problem of the poor.

The violence of 2008 was still shocking.

The country fell into mourning; South Africans understood that the innocence of democratic transition, purposefully packaged in cotton and celebrated with confetti, had finally been taken. The mask had fallen.

This was a country now reverberating under the internal schisms of rising dissent and desperation. The South African government, for its part, refused to label the violence as ‘xenophobic’.

Then President Thabo Mbeki, at the very end of his second term in office, said those who wanted to use the term were “trying to explain naked criminality by cloaking it in the garb of xenophobia”.