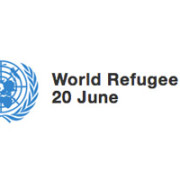 In 1951 the United Nations Refugee Convention declared that a refugee is someone who fled his or her home country owing to “a well-founded fear of persecution because of his/her race, religion, nationality, membership in a particular social group, or political opinion.”1

Today, according to the United Nations’, is the day that “the world commemorates the strength, courage, and perseverance of millions of refugees.”2

To put the refugee crisis around the world into perspective, every minute 24 people leave everything behind to escape war, persecution, and terror.3 It is as if every minute 24 people you pass on the street or in your office building or in a restaurant were to flee your country out of pure terror. The UNHCR has found that there are 65.3 million forcibly displaced people worldwide, 21.3 million of those displaced people are refugees and half of those refugees are under the age of 18.4 This means that there are more than 11 million refugees under the age of 18 worldwide.

In South Africa, for instance, we lack the proper legislation to deem attacks against refugees what they are: hate crimes. Currently, there are no laws in place that mandate that the National Prosecuting Agency (NPA) and the police look further into the motives of crimes that target an individual’s identities or perceived identities.

There have been widespread xenophobic attacks in South Africa for years. Of the most horrific were the attacks in 2008 and 2015. In 2008, violence emerged amongst townships across South Africa. Township residents were verbally and physically attacking other township residents, dubbed “foreigners,” because of their non-South African nationalities. Houses were burnt, shops were looted and burned down, and in total 62 people died.5 Similar store looting occurred in 2015. In April 2015, attacks on foreign nationals continued as shops in KwaZulu-Natal were looted and set on fire. Around 2,000 people were displaced because of this violence and 7 are said to have died.6

And these are the deaths that we know of. Without legislation mandating that the police look into the motives of crimes, specifically those that may be motivated by hate, there is no way to know the number of xenophobic attacks that occur each day here in South Africa.

It is this kind of unmistakable injustice that demands action from the South African government. We, the Hate Crimes Working Group, believe that the first stand South Africa must take is passing the Prevention and Combating of Hate Crimes and Hate Speech Bill. With this bill, police will be directed to investigate the motives behind supposed hate crimes. By passing this bill South Africa will prove to society that we do not tolerate violence against people because of their race, gender, sex, ethnic or social origin, colour, sexual orientation, religion, belief, culture, language, birth, disability, HIV status, nationality, gender identity, albinism, or occupation or trade. These crimes can then be prosecuted to the furthest extent, creating a framework for detection and prosecution. Lastly, the NPA will be able to keep track of the trends of xenophobic attacks and act preventatively.

This is why it is incredibly important today of all days, on World Refugee Day, to consider the ways that we could, and should, protect the refugees who live among us here in South Africa. We have a duty to them, and to ourselves, to protect against any discrimination or violence that they experience in South Africa when it is this treatment that they fled their home countries to escape.